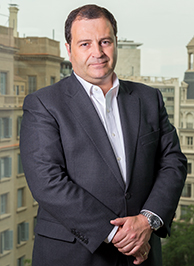 Raúl oversees and coordinates the identification and evaluation of investment opportunities from the scientific and business perspectives.

Raúl serves on the board of CorWave, Anaconda Biomed and MedLumics. Formerly he was board member at STAT-Dx (acquired by Qiagen) and Prexton Therapeutics (acquired by Lundbeck).

Prior to joining Ysios in 2008, he developed his career in Laboratorios Almirall initially in corporate business development (Licensing In and Licensing Out) and then as responsible for developing and managing the business of the company in the Americas and Africa through licensees and distributors.

He holds a bachelor’s degree in Biological Sciences by the UPV-EHU and a Ph.D. in Neurosciences by the same university and the CSIC.