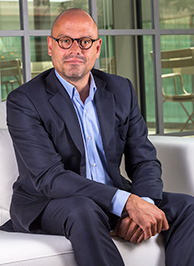 Joël oversees all operations at Ysios Capital, including management, strategy and standard operations.

Previously, he co-founded Glycart Biotechnology in 2001 and was its CEO until it was successfully sold to F. Hoffmann La-Roche four years later. Glycart Biotechnology was the originator of the anti-CD20 antibody – obinituzumab/Gazyva®, the first breakthrough designated drug approved by the FDA in 2013.

Joël holds a MSc in biotechnology and a PhD in the fields of cell biology and immunotherapeutics, both from the Swiss Federal Institute of Technology (ETH) in Zürich. He was elected one of the 50 key players in biotechnology in Switzerland in 2003 and earned several innovation awards for GLYCART, including the Wall Street Journal Europe Innovation Award in 2001.