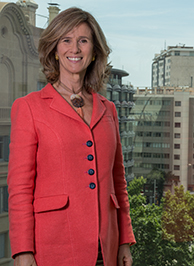 Cristina supports institutional relations at Ysios, both in Spain and abroad, as well as investor relations and fundraising.

She served as Minister for Science and Innovation of Spain from April 2008 to December 2011, leading some of the most groundbreaking reforms ever made in this area, including the Spanish Innovation Strategy and the Law for Science, Technology and Innovation, as well as restructuring of major government funding programs and agencies. During her tenure she forged important international agreements, especially during the Spanish Presidency of the Council of the European Union in 2010.

In 2001, she founded and developed the biotechnology holding Genetrix, with successful private fundraising of €90 million. Previously, Cristina was Executive Vice President and CFO of the Amasua Group.

Cristina served as President of the Spanish Bioindustry Association (ASEBIO), as member of the board at the Spanish Confederation of Employers’ Organizations (CEOE), and as member of various scientific or advisory boards. She is currently a member of the Advisory Board at the Productive Transformation Program, led by the government of Colombia and chaired by Colombian president Juan Manuel Santos.