TiGenix Business and Financial Update for the First Half 2016

Below are the key business and financial highlights for the first half of 2016, ending June 30, 2016, as well as other post period events:

“It has been an extremely positive first half of the year for us. We have made solid progress both on the operations and in the financial front,” said Eduardo Bravo, CEO of TiGenix. “With our recent licensing agreement with Takeda, with their solid track record and strong leadership position in gastroenterology, we have the best partner with the needed capabilities and resources to secure the commercial success of Cx601. We have also gained the financial strength to move forward with the clinical development of Cx601 in the US and continue to make progress with the rest of the assets in development such as AlloCSC-01 in Acute Myocardial Infarction and Cx611 for Severe Sepsis. TiGenix is in an excellent position with clear value-creation catalysts in the medium-to-short term.”

In February TiGenix secured the license for the commercial production of cell therapy products, a relevant achievement to secure the needed commercial manufacturing capacity for the forthcoming launch of Cx601 as well as for the fulfillment of the final requirements to file a Marketing Authorization Application (MAA) for Cx601 with the European Medicines Agency (EMA).

In March TiGenix announced positive follow-up results at 52 weeks for Cx601, reporting sustained efficacy and safety profile. Top line follow-up data showed that in the ITT1 population (n=212), Cx601 achieved statistical superiority (p=0.012) with 54% combined remission at week 52 compared to 37% in the placebo arm. The 52-week data also showed a higher rate of sustained closure in those patients treated with Cx601 and in combined remission at week 24 (75.0%) compared to patients in the placebo group (55.9%). In terms of safety, treatment-emergent adverse events (non-serious and serious) and discontinuations due to adverse events were comparable between Cx601 and placebo groups.

The relevance of the 24-week results of Cx601 and its potential as a truly innovative treatment for complex perianal fistulas in Crohn’s disease patients was further confirmed by their selection for oral presentation at the two most important medical congresses in this field: in March in Europe at the ECCO, the main European congress for Crohn’s and Colitis specialists, with more than 6,000 delegates registered this year; in May in the US at the Digestive Disease Week, the largest congress with international attendees and organized in the US for the fields of gastroenterology, hepatology, endoscopy and gastrointestinal surgery. Furthermore, in July, the 24-week results were published by The Lancet2, one of the most highly regarded and well-known medical journals in the world. This publication will increase awareness of Cx601 results ahead of the initiation of the pivotal Phase III trial for registration of Cx601 in the US.

In July TiGenix entered into a licensing agreement with Takeda, a global pharmaceutical company active in gastroenterology, under which Takeda acquired the exclusive right to develop and commercialize Cx601 for complex perianal fistulas outside the US. Under the terms of the licensing agreement, TiGenix received a cash payment of EUR 25 million after signing. In addition TiGenix is eligible to receive additional regulatory and sales milestone payments for up to a potential total of EUR 355 million plus double-digit royalties on net sales. The first anticipated milestone payment will be EUR 15 million upon obtaining the marketing authorization of Cx601 in Europe. Takeda has also committed to an equity investment of EUR 10 million within 12 months from signing the agreement. This agreement increases the probability of commercial success of Cx601 by drawing on the reimbursement and commercial expertise of one of the leaders in the field. Finally, this agreement provides TiGenix with the financial strength necessary to move forward with the development of Cx601 for registration in the US and advance with the other assets in its allogeneic stem cell platforms. Page 3 of 8

TiGenix retains 100% of the US rights, estimated to be 50% of Cx601 global market, as well as the right to further develop Cx601 in new indications. The US Food and Drug Administration, or FDA, agreed through a special protocol assessment procedure (SPA) in 2015 that the pivotal Phase III trial, if successful, could, together with the European Phase III data, serve as supportive evidence for filing a biologics license application, or BLA, for regulatory approval of Cx601 with the FDA. TiGenix expects to initiate such trial in the first half of 2017. TiGenix is currently exploring different expedited pathways, which could facilitate and accelerate Cx601 development and the review of its future BLA.

In June, TiGenix announced the preliminary interim six-month Phase I/II results of AlloCSC-01 in Acute Myocardial Infarction. As per the protocol design, the primary objective of this study is to provide evidence of the acute and long-term safety profile of AlloCSC-01. On the primary acute safety endpoint, no mortality from any cause within one month was recorded for both placebo and AlloCSC-01 groups, as was reported at six months. Similarly, no major adverse cardiac event (MACE) was recorded within one month in either group. Importantly for the long-term safety evaluation, no MACE was recorded in either of the two groups at six months. The safety results confirm that the intracoronary delivery of AlloCSC-01 is well tolerated during the acute and sub-acute phases of the infarct, fulfilling the principal goal of the study at six months. Preliminary secondary efficacy data at six months was limited to infarct size evolution, defined as a percent of the left ventricular mass measured by magnetic resonance imaging. The mean absolute change in infarct size from baseline to six months was similar in both groups. The final full set of safety and efficacy study results at twelve months will be reported in the first half of 2017.

With respect to Cx611, our second allogeneic expanded adipose-derived stem cell based (eASCs)-product candidate intravenously-administered, TiGenix has made solid progress in the preparation activities for the Phase Ib/IIa clinical trial in severe sepsis secondary to severe community-acquired pneumonia (sCAP). The study is a randomized, double blind, placebo controlled multicenter trial expecting to enroll 180 patients across Europe (the SEPCELL study). TiGenix expects to enroll the first patient of this study in the second half of 2016. SEPCELL has been awarded a EUR 5.4 million grant by the European Union under the Horizon 2020 Research and Innovation Programme.

In July TiGenix announced the initiation of the withdrawal of the marketing authorization for ChondroCelect for commercial reasons. This decision is in line with TiGenix’s strategy to concentrate its resources and capabilities on its allogeneic stem cell platforms.

Financial Highlights for the first half 2016 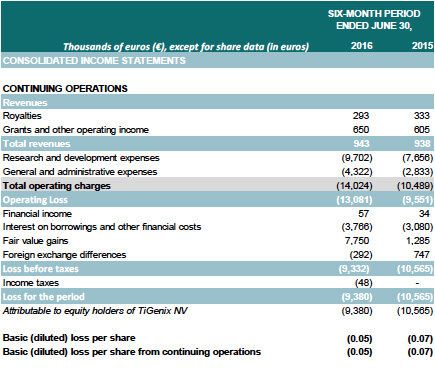 During the first half 2016, total revenues remained stable at EUR 0.9 million when compared to the same period of 2015. Revenues mainly represented royalties and other operating income received from Sobi.

Research and development expenses for the first half 2016 amounted to EUR 9.7 million, compared to EUR 7.7 million for the same period in 2015, a 26% increase which is mainly attributable to clinical activities in connection with the ongoing Phase I/II clinical trial for AlloCSC-01 in acute myocardial infarction, the preparation activities for the launching of the pivotal Phase III trial for the registration of Cx601 in the US and the Phase Ib/IIa clinical trial for Cx611 in severe sepsis as well as other key activities related to the filing of Cx601 MAA in Europe.

General and administrative expenses in the first half of 2016 increased by 54% and amounted to EUR 4.3 million. This increase was mainly attributable to non-recurrent expenses related to advisory fees for the preparation of the US IPO and the Takeda licensing agreement.

As a result of the above, the operating loss amounted to EUR 13.1 million compared to EUR 9.6 million during the same period of 2015.

At the end of June 2016, the Company had cash and cash equivalents of EUR 24.1 million, compared to EUR 18.0 million at the beginning of the year. This increase is mainly due to gross proceeds of EUR 23.8 million raised through the March private placement via an accelerated book-building procedure with specialist investors in Europe and in the US. Net cash used in operating activities in the first half of 2016 amounted to EUR 12.6 million. Additionally in July TiGenix obtained a cash payment of EUR 25.0 million after the signing of the licensing agreement with Takeda.

TiGenix anticipates announcing the following key milestones over the next 18 months:

The review of the statutory auditor of the Company, BDO Bedrijfsrevisoren Burg. Ven. CBVA, can be found in the Condensed Consolidated Interim Financial Information for the first half of 2016 in the investor section of the TiGenix website at http://www.tigenix.com.

The interim financial information for the first half of 2016 can be found in the investor section of the TiGenix website at http://www.tigenix.com

On Tuesday, September 20, 2016 at 10:00 am CET, TiGenix will conduct a conference call and webcast. The following speakers will present the first half 2016 business and financial update, and take questions afterwards:

The webcast can be followed live online via the link: http://edge.media-server.com/m/p/obci8p55

The press release and the webcast slide presentation will be made available in the Newsroom section of the TiGenix website. A replay of the webcast will be available on the website shortly after the live webcast has finished.